I am trying (to understand). In the process, I hope to share my experiences on this platform... When I write, I need to self-talk, read, re-read, (re-write)... Then I find gaps, my mis-understandings, errors both in my writing as well as in behavior. And I get lessons on what I need to learn/improve. Then I try. I fail. I re-try. I fail. Did I? No, because I tried again. This is my way of life to lead myself: Personally and Professionally. Checkout my other blogs and work at http://www.worldOFkaizen.com/

IQ, EQ or SQ: What is more important

March-April is generally final-exam-time in India. It's an anxiety period of the year both for parents and children alike. Parents of children in their mid-school days as well as those wanting to choose their career post-schooling do rush to take IQ (Intelligence Quotient) tests around this time.

Educational institutes offering  professional courses have already been using IQ tests for admissions just as corporates been using for recruitment. In fact, IQ tests have gained too much prominence out of it's proportion at times.

After all how important is the IQ test! Is there anything beyond it!

Is knowing answer to a typical question like "Is throwing trash on floor wrong and bad for health?" is enough.

(Picture from Book “World Of Kaizen” by Shyam Talawadekar) 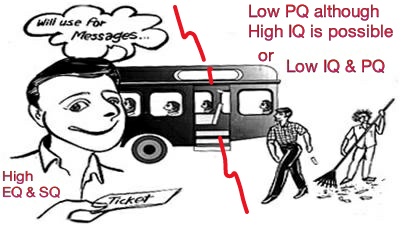 If a prospect appearing for IQ test (is confronted with such a question if at all and) answers it with 'correct' option, s/he may get points added to her IQ.

Choosing option "No" to the question, "Do you throw trash on floor?" also may add points to her IQ although s/he may not be practised-in in the 'answered' good-practice herself.

In real life if s/he practises this good-practice consistently then s/he may add points to her practical quotient, PQ (the term used by Bill Macaux in his blogpost).

In spite of negative reaction of 'trash-throwers' around, if s/he perseveres in finding and getting implemented ways-and-means (sama-dama-danda-bheda concept) to prevent them from 'throwing trash' without losing temper & patience then s/he may add points to her EQ (Emotional Quotient).

In spite of success in getting the good habit inculcated in herself and others, s/he doesn't feel 'great' about it, nor does s/he 'looses heart' on failing in her efforts then s/he is aware of her 'self'. S/he may add points to her SQ (Spiritual Quotient) since s/he supposedly continues to do her good work (Karma) with equanimity.


More the usage (i.e. PQ) of IQ-EQ in order to manipulate, worse it is for the overall good. More it's used ethically, better it is. That's the SQ: being Apex to all, the IQ-EQ-PQ!

Going beyond the IQ, how many parents realise the need to invest in enhancing the EQ and SQ not only in their ward but before that in their own self?

Now a days some educational institutes, if not universities, do realise the need for EQ training as well as a part of their private curriculum. Very few have begun realising the need for the SQ though.

Having good score in IQ is like a passport. One does need to do homework, hardwork and smartwork to get it. But to 'succeed' in life and to be a good leader one necessarily needs both the EQ and SQ, actually with more weightage at that than the IQ. Only then would the candidate be able to take so-called 'failures & successes in life' in her stride.

Methods to score in IQ tests are well established.
How to score in EQ & SQ is the real challenge.

It's a collective, long-drawn, practice-dominated process that necessarily involves one's own self alongwith not only the parents, teachers, professional guides but also media, society, government, etc.

A typical country might have had a better balance of IQ, EQ & SQ at some point in time on it's evolutionary journey just as ancient India had it a few thousand years ago. 'Principles' in that case may still be valid and accessible in history and management books but the 'practices' may need overhauling in order them to be adaptible in the 'current and the local context'.

If one were to learn from others, Japanese Kaizen process and it's adaptations in some south Asian economies are easily accessible. They are 'not-so-easy' to learn though unless the learner is ready to shed her ego and embrace them with 'open mind'. In fact one reason of them being 'not-easy' is the basic steps in installing the process that revolves around 'learning by practising rather than preaching'. Another reason is the tendency to discard it saying "it's pure commonsense".

If one practises it in it's true spirit it does enhance all the three quotients (IQ-EQ-SQ) holistically, irrespective of educational background of an individual.

Faster this realisation dawns among parents and teachers in particular, as also leaders and decision makers in power be in society, at workplace, or at national level, faster shall be the progress of such individuals themselves, institutes and nations.

Otherwise more and more 'human robots' will keep getting 'made' who shall keep venturing into rat-race of producing and consuming more and more 'material wants', vying for quick-results (and getting depressed in absence of that or in case of adversities) inviting imbalanced health of body, mind and spirit for themselves and for others, endangering that of the planet itself.

(P.S. Please do value-add hereunder with your experiences, questions, suggestions and comments, if any, in this regard.)

Taken-For-Granted ? You Deserve It !!
Strategise To Achieve Targets Daily
Does recognition really matter
IQ-EQ-or-SQ: What-is-more-important?
Do you know a Best-Career-Plan
Take your career in fast lane!
Succession-Plans In Fast Lane!
Treat Root-causes, Not Symptoms !
Nauseous Communication Gaps
Do You Cleanup-After-Crisis
Raam or Krishna-Shyam: Tell me Hey Raam!
Will It Work Here?
Some Moron ! Some Great !!!
That's How Morons Work
You seem Reasonable if you appear Un-reasonable
Smart-Moron Who Breaks Your Glass
WOW Work-Culture: By Telling or Selling
Suggestions On-Sale, None-To-Buy
Can-changing-thoughts-change-a-nation
Ridiculous Poison-culture versus Maverick Kaizen-culture
Tolerate Once, Twice, Thrice?
Make checklists your friends
Make It Simpler, Rest Will Follow
How To Make A Difference
Big-Be Or Bug-Be !
A customer gets what s/he deserves: Shoddy Quality!
Listen to iceberg of VOC to acquire customers
Posted by Shyam Talawadekar at 20:06